By Chehneet KaurBudweiser recently, took down its #StrongerTogether campaign after it was called out for being ‘insensitive’, ‘casteist’ and ‘tone deaf’ on social media.

The brand reached out to their audience asking them to post pictures with their helpers, watchmen, and drivers in order to assist them in vaccination. Post the repercussions, the brand had to pull down its post from all the social media handles and Humans of Bombay too.

“About @BudweiserIndia #StrongerTogether campaign. Paying influencers to post pictures with domestic workers without ensuring that they are fairly compensated for content based entirely on them, just doesn’t sit right. They reached out to me to be a part of this. I declined & flagged this concern along with asking them to not refer to domestic workers as help. Which was the copy of the proposal sent out. There are better ways to promote your brand than off the backs of vulnerable groups of workers who are being treated as props. Equally applies to influencers. (sic).” tweeted SheSays founder and activist Trisha Shetty.

this concern along w/asking them not to refer to domestic workers as help. Which was the copy of the proposal sent… https://t.co/iQwGtJDMcx

This is not the first time that the alco-bev brand has been in the headlines for the wrong reasons. During the Super Bowl in 2017, the ad commercial intended to showcase the difficulties immigrants faced in America by portraying their founder Adolphus Busch, a German immigrant in 1850’s. The beer brand chose to air the commercial during the most expensive slots in television. All the American crowds united to call out the brand’s bigotry back then. Have a look at some of the tweets that dissed the brand:- 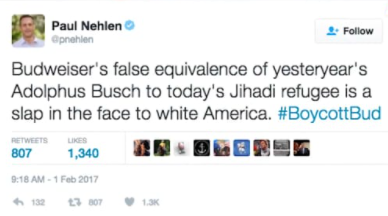 Recently in April too, Budweiser was loathed for displaying Messi’s graffiti street art all over the country. From Hauz Khas in Delhi to Chapel Road in Mumbai all the walls portrayed the life and journey of the footballer. But soon, St+art India Foundation went to the social media saying “It has taken many years for organisations such as ours to build the street art scene in India. One cannot simply hijack it OVERNIGHT.” The contention in this case was also that existing graffitti had been removed to accomodate Bud’s campaign, which ended up on a school wall of all places.

–The above news was originally posted on brandequity.economictimes.indiatimes.com

India-Australia FTA to kick off on Dec 29, boost trade relations...